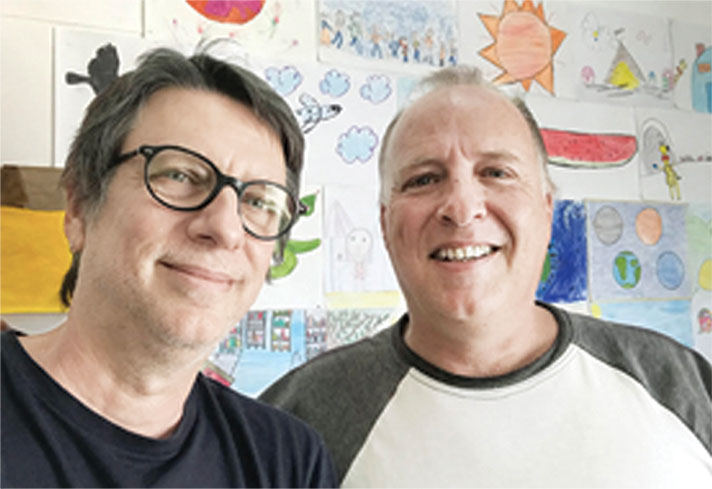 Vitor Azambuja, father of two, is Brazilian, born in Rio de Janeiro.  A creative specialist, he is art director and a plastic artist.  Graduated in advertising and classic piano, he has worked in various advertising agencies in Rio de Janeiro and São Paulo, creating TV commercials and ads for major advertisers.  Vitor has exhibited his paintings in São Paulo, Rio de Janeiro, New York, Miami and Paris.  One of the creators of the By Kids to Kids program, he is the creative director of the company.  His objective is to have children from around the world learn through developing their creativity.

Gilberto Barroso, father of three, is Brazilian, born in São Paulo.  Graduated in Business Administration, he worked in various segments and specialized in the Pay TV segment, where he worked since its beginning in Brazil, distributing the HBO channel and then becoming a director for Sony Pictures.  Gilberto launched various channels such as AXN, Warner, Sony, Cinemax, HBO, The History Channel and E!.   In 2015 Gilberto left the Pay TV segment to launch the By Kids to Kids program.  He is CEO of the company, and his objective is to have children from around the world learn and share knowledge in a creative and democratic manner.

Vitor and Gilberto realized that one of the current challenges is to develop methodologies capable of keeping students interested in curricular subjects. In addition, there is an increasing search for educational methods that are playful, active, and interactive. After all, stimulating the participation of the student in the construction of knowledge has already proved to be a differential in the assimilation of content. What By Kids to Kids promotes with its hybrid and innovative methodology, contemplates this search and more.